Where Would D.C. Be Without Da Hook? 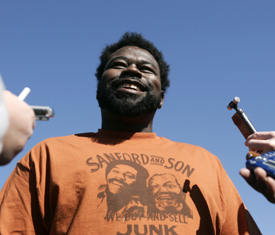 Ronnie Bellard will stick around to see the new Nats stadium next year, but what of Da Meat Hook?  D.C.’s GM mastermind Jim Bowden (you know, the guy who didn’t trade Soriano at this time last year, only to see him walk with the team getting nothing in exchange) remains rather mum on Dmitri Young.

It is clear how much Nats fans love them some Meat Hook. Much like Soriano last season, he has been the one bright spot for this franchise, aside from the “Beers of the World” stand in section 521.  Besides, where would the team be this season without him? Exactly where they currently are:

“He has meant a lot. He has meant almost everything,” [Manager Manny] Acta said. “I know without him, we’d still be in last place — and that’s where we are with him — but we’d be in much worse shape.”

Does Manny Acta really believe that there are varing levels of the term “last place”?