Is Jim Larranaga Taking His Talents From Mason to South Beach? 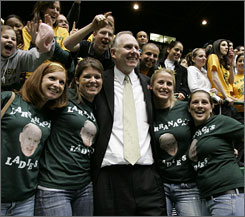 Mason coach Jim Larranaga and Miami are reportedly in “serious discussions” about their head coaching vacancy. The talks are “advanced and ongoing” and are nothing to be concerned about. Larranaga isn’t leaving Mason for Miami. Here’s why!

Having said all that, if Miami offers him some ridiculous sum of money … well, anything is possible. But at this point in Larranaga’s career, and given how much he seems to enjoy coaching at Mason, it’s hard to imagine he’s leaving. Fingers crossed.