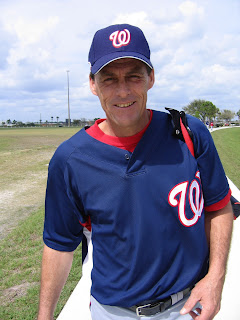 It seems somewhat fitting that on the day in which Steinz explores the extremely short tenure of D.C. area managers/coaches, Nationals pitching coach Randy St. Claire gets fired. He was hired in 2002, making him not only the longest tenured coach of the franchise, but also the longest running pitching coach in the division.

St. Claire admitting that the pitching hadn’t been up to par this season. Which is obvious based on their team ERA, WHIP, K/BB, BA against, etc., all of which are the worst in the majors. From Nationals Journal:

“The pitching isn’t performing up to where it needs to be to win, and I think a lot of factors go into it, but I guess I’m easier to replace than 12 guys,” he said. “Easier to replace and cheaper to replace. But that’s the game. When the team doesn’t perform, they’re bound to make changes.”

The Nats have the Giants, Mets and Reds at home for their next three series. I’d guess anything less than .500 ball over that stretch and Manny Acta won’t be making it out alive. Jim Riggleman, dust off your managerial shoes.