We’re approaching the point where literally every person in America with a soapbox of any kind will have weighed in on the Redskins name. As part of staking their flag into a small square of this hotly disputed rhetorical soil, most of those people will suggest possible alternate names. Eighty-five percent of those names will be the goddamned potato joke, and the remaining 15 percent will be terrible.

The current front-runner for worst in the clubhouse comes from Fortune Magazine managing editor Andy Serwer, who suggests in a Politico column (for a section of the site, it’s worth noting, that is literally called “Soapbox”) that the team be renamed the Washington All-Americans.

Serwer’s argument hinges on three points. First, the obvious squishy liberal inclusiveness the name implies. Second, “All-American” has a positive connotation in a sports context. And third … well, I’ll let him tell it:

I did some digging around and discovered that “All-American” used to be an obscure Marvel comic book super hero back in the 1980s. And get this, he was a football player! The All-American character was ‘really’ Giovanni “Jack” Magniconte, star quarterback of the fictional New York Smashers, nicknamed “Mr. Magnificent” by the press.

And … yeah. Hoo boy. Using this as an argument for choosing a team name is like naming your baby “Ishtar” because it was the title of a big-budget movie with some big-name stars. Let me get my geekhat on so we can do a deep nerd-dive on this.

Magniconte was the star of a doomed book called Kickers Inc., which was one of the launch titles in an equally doomed Marvel sub-imprint called the New Universe. Launched in 1986, the New Universe was meant to be “the world outside your window!” — a more realistic look at people with super powers running in something like realtime, basically — as an attempt to recapture the IP-generating lightning in a bottle that was the launch of the original Marvel Universe 25-ish years prior.

Kickers Inc. was arguably the stupidest book in the line, and was one of four launch titles canceled at the end of its first year. The imprint as a whole lasted just two more years, flailing around in increasing desperation before being mothballed. In those two years, Magniconte resurfaced as a supporting character whose role is basically “government stooge.” Not exactly a pop-culture icon to name a football team after.

Just to drive the final nerd-nail into the coffin of this idea, there’s this: The New Universe popped back up in 2008 as an even grittier “re-imagining” of the concept. This time around, Magniconte’s powers manifest while he’s on the field mid-game, which results in a graphic, on-panel depiction of him stiff-arming a dude so hard that he explodes in a spray of guts and bones. This is EXACTLY the kind of association the NFL is trying to draw in these days of concussion awareness and increased player safety concerns. (For a fun thought experiment, try to imagine the league’s earnest “don’t use super-powers on-field” ad campaign following that disaster!)

In summary, the “Washington All-Americans” idea is every bit as terrible as you think it is, and dragging in this stupid Marvel reference only makes it worse.

Which is not to say that the idea of borrowing some of the names or concepts from the Marvel Universe is inherently terrible. Here are 18 other Marvel-inspired potential names that are marginally less awful, or, at least, better thought-out.

Relevance? Starts with Red. Character is Native American, allowing the team to retain portions of current branding and iconography.
Why? Character draws his powers from contact with the earth, appropriate for the long history of ground-based Redskins gameplans. Was really strong, and managed to beat a thinly-veiled Superman stand-in in personal combat.
Why not? First incarnation of character died in space. Second incarnation of character, created to be “realistic” and “grim” in the mid-’00s, was a misogynist serial killer supervillain.

Relevance? Starts with Red. Would be possible to keep a modified version of Hail to the Redskins.
Why? Redwing is a hunting falcon who shares a psychic bond with the hero known as the Falcon, Captain America’s sometimes-partner. Captain America himself has referred to Redwing as one of his best friends. (Captain America, as a man out of time, is always hard-up for friends.) Bird names are a well-established trope of football. No risk of racism accusations.
Why not? As sidekick to the Falcon, “Redwing” would create a logistical nightmare when the team plays Atlanta. Also, it’s a sidekick hero’s bird sidekick, maybe not quite the reference the team wants to evoke. Oh, and there’s that hockey team, too. Relevance? Has the word “red” in it.
Why? Ties in to highest-grossing movie of all time. Implies strength, anger, and a keen insight into screenwriting and story structure.
Why not? Is a really stupid name.

Relevance? Has the word “red” in it.
Why? Allows the use of crazy Jack Kirby-created concepts and iconography. Refers to a giant robot-esque creature of godlike cosmic power.
Why not? The potential mix of the D.C. football franchise and the Jack Kirby creator-ownership lawsuit is a recipe for abject disaster. “Celestial” is an early 20th-century term for Chinese emigrants, so the whole “is it racist?” cycle could easily start over again.

Relevance? Starts with R. “Reaper” was a nickname for Redskins legend Sean Taylor. Allows for a modified version of Hail to the Redskins.
Why? Because it’s an awesome name with a bunch of built-in tough-guy iconography AND relevance to one of the team’s deceased icons.
Why not? Well, if you want to drag comics into it, the first Reaper in Marvel Comics was yet another Nazi, created by Stan Lee back in the days when the actual Nazis were still a going concern. And the current Reaper is a pretty dumb character who was created by a dude best known for being in a jeans commercial directed by Spike Lee. 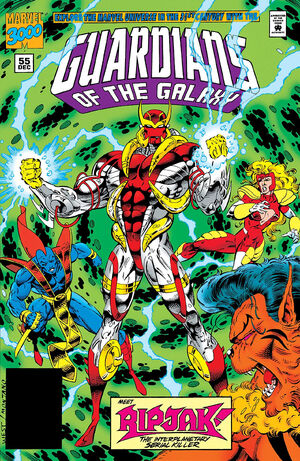 Relevance? Starts with R. Would be possible to keep a modified (albeit super-weird) version of Hail to the Redskins.
Why? Well, it’s unique. Ripjak ties into the comic book mythology of Guardians of the Galaxy, Marvel’s next big movie. Dude also got his powers by, apparently, ingesting the preserved blood of Spider-Man, which is kinda interesting.
Why not? As you can see in the image above, Ripjak also goes by the alias “Interplanetary Serial Killer,” which isn’t exactly the cuddliest of branding. Guardians of the Galaxy is currently poised to become the most overhyped movie of this decade and might not be the best thing to tie to.

Relevance? Allows the retention of most of the branding, fight song, etc.
Why? James “Warpath” Proudstar is part of the X-Men universe of comics, which is a good brand to be associated with, if you like that sort of thing. He has super-strength, nobility and all those other hero traits.
Why not? I’m assuming the reasons why not are blindingly obvious. Relevance? Seventy-five percent of what happens around this team feels like the apocalypse.
Why? Singular team names sound cool. The comic book reference is to a villain whose powers are so ill-defined as to be virtually limitless, kinda like RGIII. Apocalypse is set to be the main villain in the next X-Men movie.
Why not? Singular team names are hell on writers, bloggers and copy editors. The next X-Men movie might very well be unwatchably awful.

Relevance? D.C. is the nation’s capital and home to the core of our literal war machine.
Why? Singular team names sound cool. Ties in to the popular, lucrative Iron Man franchise. Celebrates one of Marvel’s better-known minority heroes, which swings the karmic pendulum away from the whole debacle that “Redskins” seems to have become.
Why not? Someone is bound to object to an overtly war-themed team name, probably RGIII. Also, singular names are still hell on the journalists.

Relevance? Initials spell out Washington D.C.
Why? Reference to “damage control” shows a certain self-aware humor toward the name-change situation, and also calls attention to one of the things this franchise does most. The comic book referenced is smart, savvy and funny, all attributes this franchise could use.
Why not? Naming yourself directly after a bunch of dudes in suits who clean up after superheroes isn’t particularly imposing.

Relevance? Is a thing that actually exists, not far from the football team’s ancestral homeland of RFK.
Why? As a teleporting member of the X-Men, Gateway calls to mind the ability to consume yardage in chunks.  As previously mentioned, singular team names are awesome.
Why not? I had to Google “is aboriginal an offensive term” just to write this entry. Probably best to stay away.

Relevance? Hearkens back to Slingin’ Sammy Baugh.
Why? New pass-happy attack in Washington foregrounded in name. Comic book reference is to four dudes who stood in for Spider-Man when he was briefly retired or dead or hibernating or something, which is appropriate for a replacement name.
Why not? Sounds like a semi-pro soccer team in Montgomery County.

Relevance? Like the Redskins, this comic last saw its greatest success in the early 1990s.
Why? Ghost Rider-related iconography lends itself well to new helmet design, logos, gear, etc. Mention of “vengeance” evokes the frustration supporters of the “Redskins” name are going to feel if it ever changes.
Why not? Needlessly long. Also, the local women’s soccer club will probably object. Relevance? Ties in to D.C.’s iconic Air & Space Museum. Would be possible to keep a (heavily) modified version of Hail to the Redskins.
Why? Because if you’re going to let your team name be influenced by a comic book, “Spaceknights” are exactly the kind of awesomely stupid concept you should use. Could still play up the natural Cowboys vs. Spaceknights rivalry.
Why not? Licensing issues have forestalled the reprinting of most of the ROM: Spaceknight series from which the concept stems; remaining spaceknights were largely obliterated in recent Avengers comics.

Relevance? Color scheme is mostly right
Why? As an unstoppable dude in a helmet designed to protect his brain from damage, the Juggernaut might as well be an NFL player already.
Why not? Seventy-five thousand fans all screaming “I’M THE JUGGERNAUT, BITCH”. Relevance? One member of the team was named Fred Davis.
Why? It’s an aspirational name.
Why not? Would probably seem really pathetic after a loss.

18. Washington Organization Designed Only for Killing

Relevance? W.O.D.O.K. NEEDS NO RELEVANCE
Why? Because there is no better role model than the Mental Organism Designed Only for Killing. Because the licensing potential for M.O.D.O.K. versions of football players would be amazing. In short, BECAUSE W.O.D.O.K., that’s why!
Why not? There is literally no reason this wouldn’t work.

The Incredible Anti-Redskins Commercial
RGIII Is Still Here, You Guys